The title of this blog was simply to announce my return to the blogiverse, however as I went on to write this entry, I realized it had a double meaning so I added the last half.

I've been having an urge to write again and haven't really embraced it in long form. I've become a TWITTER beast and essentially, I COULD probably blog every day if I strung my tweets together, but they probably wouldn't make much sense. Then again, who knows if my blogs would either...
I started REALLY blogging back in 2008 on MYSPACE - WOW...MYSPACE! I had just been cast in the Aladdin Musical and wanted to share the experience of the audition and then decided I'd continue writing as the process went on...a journal of sorts. 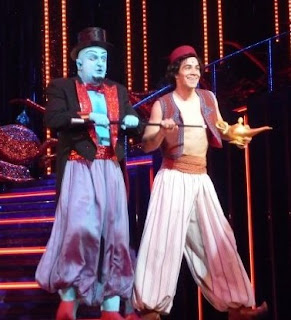 I actually ended up enjoying it quite a bit and looking back (as I cringe at some of the nonsense, drama and silliness I wrote about), I'm thankful to be able to read and re-live those days. If my memory suddenly went, I feel like I'd at least have something to look back on and fuel some sort of spark of what once was...

I thought about deleting the entries that were here, but figured I'd just leave it. As much as some of the Aladdin entries are like looking at an old picture and wondering, "what the hell was I thinking?!" I decided I'd keep them here too. Again...if my memory was zapped by the Men in Back, I'd at least have this...right?

I love taking pictures and I'm known for always busting out a camera to record, so having something to read as well is only fitting. I've always been a sort of a documentarian in a small fashion...more on that later.

As I said, I've been having a strong urge to revisit this blogging world after taking a pretty decent absence. I've started writing articles and prediction pieces as an MMA Correspondent for http://www.mmasavvy.com and really have enjoyed it and have had a great response to it.
There is a lot going on in my life lately. I remember when I was blogging and jotting shit down regularly, I often felt relieved, like it was a solid release and it helped me move on from or deal with experiences, while finding humor in certain realities and it's no surprise that during one of the most important times of my life, I find myself back behind the keyboard.

My Dad has Cancer. He was diagnosed with Esophageal Cancer late 2010. This was less than a year after my Uncle passed from Colon Cancer. Growing up, my uncle was the closest male influence I had aside from my Dad. Many of the things I love to do in life were things I picked up from these two great men. Playing Sports, Fishing, Music, Finding the hidden bunnies on the Playboy Magazine Covers, Professional Wrestling, Singing, love for my family...just a small fraction of their influence on me.

My Dad has always been my hero. Always will be.

It's been both a blessing and a curse to be living across the country in California while my family has been IMMEDIATELY dealing with the seriousness of the illness my father has been facing here in NJ. It's scary. I was told at times that they didn't want me to worry or be bothered by it, but of course I did. My parents would take on the world before letting me worry just so I could focus on small things. Sometimes I would embrace that. I never felt like I was in denial of anything, but not being there probably made it easer for me...then. I have no doubt it is something that will make it that much more difficult now.

I sit here in a hospital room typing on a cramped couch. Machines hum and snoring comes in waves from my roomies for the night. My sister on a makeshift reclining chair deeply sleeps, my Dad in his hospital bed. He wants nothing more than to go home and he's growing restless. We are too. I pray for patience for us all. I pray for strength and hope. His Doctors have not done much to give us answers, which is why I'm camping out here as we decided enough is enough and it was time for a chat. We didn't want to take a chance that we'd miss them Friday morning when they popped in for the meeting WE requested. A meeting my dad is entitled to and pays for, yet we were told we were out of line to ask for.

It is believed that my fathers cancer has returned to his Esophagus, but in addition, his lungs and liver are strongly believed to be under attack as well. There's not much doubt to that. We are just waiting...and WAITING...for an idea of what's to come, so that we can create and move forward with our plan of attack on this disease. It's been over a week and we have no actual results. Why? The Doctor's are quick to offer chemo treatments without much explanation, and my Dad has been told that he may be released Friday. How are they going to send him home, without giving him the breakdown of what he/we are looking at? My Dad is told he has an appointment on the 12th of July for results. That's not going to cut it folks.

My mother...my mother is probably stirring restlessly at home as I type this, before she heads back to the hospital to be here with us. She's had a rough couple of years and I worry for her. She's a strong woman, it amazes me what she is able to do through this all. She IS human though and for at least 4 years Cancer has been a part of her immediate life as she helped to care for my Uncle since he was diagnosed and now for my Dad. My sister...I can't imagine how it must be for her either. She is now entering her Senior year in high school after a difficult year, the most important of her pre-college years.

My Dad. The man I've idolized since I was a kid. Since I was a kid, my father has worked in a steel plant of some sort. This is probably a LARGE reason he has his Cancer. I recently worked on a film where we shot all overnights, like vampires, for a month. Mid-Way through when I was getting tired physically and mentally, I thought of my dad. He worked over night shifts for most of my life. Adding to that, he had to rotate from overnights to normal hours every other week or so. It took me a week to get my body in sync after filming for a month that way, my Dad did this for YEARS on and off, on and off...this was how he provided for us. I never appreciated it fully till this past April.
He was a star athlete in high school and was recruited to play baseball at some top colleges, but it never fully worked out. My dad could have been pro. Should have been. He wasn't. I would always run into coaches on teams I was playing against or people who knew my dad and they always marveled at how skilled he was. It never once pressured me to live up to it, like I said, he is my hero. It just made me that much more proud.
Since I was a kid, he coached me in various sports and drilled the importance of practice. He never overstepped those boundaries though and just pushed hard enough for me to learn, but left it up to me to really take it on. My dad once went to school for massage therapy and he loved it. He sadly, never really got into it professionally in the way he had hoped to, but I could tell he had a passion for it. I also knew since I was a kid, that aside from being a professional athlete, my dad wanted to be a gym teacher. I actually felt like that was probably what he had wanted most.

When I said I didn't really appreciate my dad's crazy schedule as a kid, I still did take something away from it. It was not a job he loved. My dad is the man most responsible for me wanting to go after my chosen career path. I made the decision at a VERY young age that I would never get stuck doing a job I didn't like for the rest of my life. It was simple. I began to see how I was surrounded by people in those types of jobs. I remember once asking my dad, "Why don't you just become a gym teacher like you want to?" I can't remember the answer exactly, but I understood that he felt it was too late. That stuck with me...

At a very young age I knew I wanted to be famous. A movie star. I was a class clown through and through and always found myself on some sort of stage. I never really stepped foot onto a real one until college, but sports always provided me with that outlet I think. I was an electrician graduating high school and almost went into the military. That was the closest I probably ever was to not doing what I wanted to do for the rest of my life, but it was my parents who knew I wanted to one day act and brought it up as an alternative. After I got their support, I realized my path to happiness was never going to be compromised again- there was no looking back. I've always had a strong will to see it all through and never doubted I would. I had the support from my family and friends and I had the promise to myself to keep. A promise to, HAVE FUN and do something I LOVE. Another part of that promise is that I would one day be able to tell my parents that they no longer had to work because I could care for them in the way they cared for my sister and I...and that I did it ALL with a smile on my face because I loved my job. I've cried recently at the thought of what may come from our current situation. So many things have run through my head and I'm not one to judge my success or put a time limit on anything because I know there's no schedule needed for fate...I find myself recently being challenged with that.

In times like this you find yourself thinking of every possible scenario. Sometimes it's morbid. Is it protection? Is it being prepared? Is it fear? I don't know...but my mind races. Within the scary thoughts lie all of the the insecurities as well. Will Dad see my kids or my sisters kids? Will he join me on the red carpet or attend an award show? Why didn't I push myself more at times? Could I have been there already? Dad loves to sing, will I ever get to do that song with him? Will I be able to ever challenge him again on the court, he's the best lefty I've played against. Will I be able to take him on his dream vacation or buy him his dream home or car?...He has always wanted an old school Hummer, or better yet, his favorite car he owned, an old school yellow beetle. Will he ever be able to just...enjoy his life? I cry. I know I'm somewhat foolish. Dad's no victim and hasn't complained in that way.

One day at a time. Today, let's get him answers and get him home. It's never too late to work on that Gym Teacher thing, Dad.